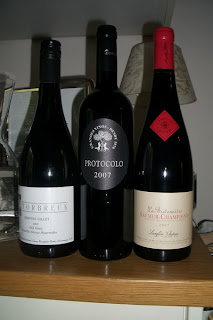 O'Briens were having another of their occasional discount weekend so I took a trip up there (the huge Beacon shop) withe a view to seeing what was on offer that I might like.
First off a got a Protocolo, I don't think I can leave O'Briens without one of these, especially as it is still priced at €8-99. I have just this second noticed that the wine I had previously was a 2006, the current bottle is a 2007. This should be interesting to see if the 2006 was a fluke or if Marcos Eguren has done it again. I have converted several people to this wine so I hope it won't disappoint.
Secondly I got a Torbreck Old Vines Granache Shiraz Mourvedre, Tomas Clancy seems to like it. I have had this before but can't remember if I liked it. It was discounted from €19-99 to €12-99 so it may be great value and worth a punt therefore.
Lastly, and for a change of pace a Saumur-Champigny from the Loire, La Bretonniere. I have had mixed results with this appelation before but have had a couple of nice ones from O'Briens before and it was discounted €2 to €11-99, so again worth a punt. It's 100% Cabernet Franc and the vineyard is owned by Bollinger, if you're interested in these things.
Posted by Willie at 7:44 PM

Email ThisBlogThis!Share to TwitterShare to FacebookShare to Pinterest
Labels: O'Briens