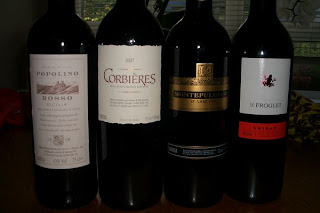 In June in this article John Wilson of the Irish Times rated sub €8 wines from a number of retail chains and M&S came out best, so I decided to try some. I haven't reviewed any wines from M&S as it is not especially convenient for me although I do like the food. In this case we decided to try the meal deal or whatever they call it whereby for €12-50 you get a main, a side, a dessert and a bottle of wine.
It turns out there is a limited range of items in each of these categories and when we got to the meal deal wine section there was only one red available - Le Froglet Shiraz 2008 (at right in picture). I suppose I should have been wary given that they had branded this a Shiraz rather than the usual French Syrah, but as it was effectively free I saw no issue in at least trying it.
I decide to give the Shiraz a fair go and decanted it for an hour or so before trying it. Initially there were two dominant flavour, harsh oaky tannins and blackcurrant. these flavours did not meld at all, they were just there, two peaks of taste dominating the skyline. There was no balance or roundness here although we gave it another half an hour but it didn't improve so I poured it down the sink. I'm not sure who this wine is aimed at, people who like Aussie shiraz will hate the oak and people who want A French Syrah won't be happy either, looks like there ain't no such thing as free lunch. Note: the list price of this wine is €7-99.
So we had to open another M&S wine. I chose the Popolino Rosso Sicilia, a cheeky €6-49. No grape varieties are mentioned on the label but according to someone on the interweb, this is made from Nero D'Avola and Sangiovese. This had the classic bitter cherry flavours initially and not much else but we persevered and after a while this rounded out into quite a decent wine, the bitterness receded and some fruit come to the fore along with some acidity. All in all, quite a pleasant wine, once decanted and great value at €6-49.
The other two wines I got were a 2008 Montepulciano D'Abruzzo at €9-99 and a 2007 Corbieres at €9-49. More of these anon.
Posted by Willie at 10:07 AM

Email ThisBlogThis!Share to TwitterShare to FacebookShare to Pinterest
Labels: Marks and Spencer