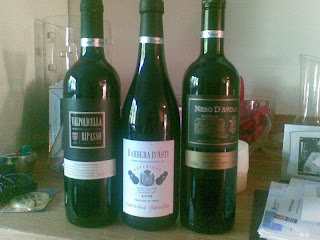 I was out with the First Thursday*(tm) crew on Friday night  for a curry and a few beers and the point was raised, not incorrectly, that this blog has gotten way off topic.  I should be posting about good value wine, not describing my adventures swanning around Bordeaux buying cases of local red and doing wine tastings from the back of an Opel van, or musings about Californian Cab Savs from posh Steak houses in NYC.
With these criticisms ringing in my ears, I was shopping in Tesco Merrion Centre on Saturday and I decided to buy some similar bottles of wine and put a post together. I was pleasantly surprised to notice that they have finally gotten some decent stock here. For about the last five years they have had essentially the same stock in the Merrion Centre, since  Tesco in the Dundrum shopping centre opened, they have had a consistently better stock particularly with Tesco own brand wines, most of which are decent and reasonable value.
To that end I bought three Tesco branded Italian reds:
Nero D'Avola 2007 - €8-69
Valpolicella Ripasso 2006 - €10-69
Barbera D'Asti  2005 - €12-49
* It was neither Thursday nor the First Thursday of the month
Posted by Willie at 11:25 AM