Crash! - A Ribera that isn't a Ribera - Liveblog! 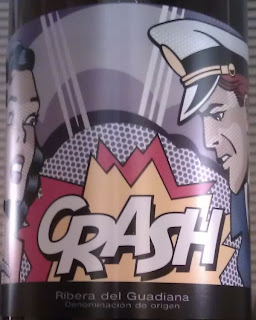 So I bought some vino in Baggot St Wines, after congratulating Catherine on their recent Noffla win - Beer Specialist of the Year 2013. A Don Tiburcio Malbec 2008 (really good), a Bajondilla 2011 from Mentrida in Spain (last tried here), and the subject of tonight's liveblog! one Crash! Ribera del Guadiana 2011 €11-99 (I think...)

It comes from the Extremadura region in Spain and contains the following grapes: Garnacha Tintorera, Garnacha, Syrah and Tempranillo. An unusual blend, IMHO.

8-pm. Catherine had told me it was light and fruity and while that's not normally my bag I decided to take a chance. It has now been open and decanted for an hour and a half so here goes. Well, its light and fruity, natch. But its pleasant. No great depth of flavour but easy drinking and perfectly fine.

9-30pm Still light, fruity and maybe some little acidity now and maybe a little depth at the back end now.

11-00pm All gone and very nice all round. Would I buy it again? Probably not, but if you like this style of wine then fill your boots.