So its come to this - another liveblog.
Firstly I need to quickly comment on wine number three (of four) from the Superquinn French wine sale - Chateau Le Mayne Bordeaux Superieur 2005 (at left). While this was not unpleasant, it didn't taste like a Bordeaux, more like a middle-of-the-road undistinguished French red. I don't know what I expected for €8, I suppose. This again confirms my rule of never buying cheap Bordeaux or Burgundy, there just isn't any good stuff around below about €20. If you know of some please let me know.
So - the liveblog, this has tended to happen of a Friday evening while watching a movie with Herself and tonight is no exception. Last time I did it the wine ended up mirroring the movie. We are now watching The Boat That Rocked, so we'll see. The wine is number four (of four) from Superquinn, a Domaine de Christia Cotes du Ventoux 2007, reduced to €8 from €14-99. 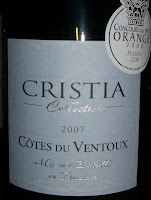 21-30 The wine has been decanting for an hour now and we have just had a first sip and very nice it is too, quite "Rhoney", a little spicy and a little fruity. Herself reckons its chocolaty and smooth but that may be wish fulfillment on her part.
22-00 I'm still liking this, it developed a little more fruit and a tadge more complexity in the last 30 minutes, not unlike the movie which has just taken a dramatic turn. The wine now has a decent finish, lets hope the movie follows suit (Woo-hoo! - film/wine comparisons are go!)
22-40 The movie is heading for its close as is the bottle, so I'll wrap things up. I like this wine, at €8 I'd buy it again, at €14-99, not so much. The movie got a lot of hate in the reviews (spoilers ahead) I've read, apart from Mark Kermode, and I'm not sure why. It's not a masterpiece but its moderately amusing, it has a great cast (some underused), it does go a bit Titanic at the end but hey, pobody's nerfect.
Next - We're off to Dax for NOB's birthday, congrats a deux, and I'll report back on the grub/vino.
Posted by Willie at 9:32 PM