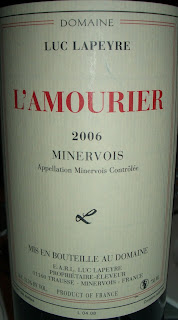 It was the occasion of NOB's hem-hem birthday and we were being brought out by BigEars, us being YHB, Herself, June and BigNose; to his chagrin BigHead was away on his hols but he sweetly ordered us a bottle of bubbly for when we arrived.
I was given the enviable task of choosing the Vino, Dax has a very extensive and expensive list so I was caught in the usual dilemma of keeping cost down while trying to choose something decent. On perusing the list I figured a Rhone or a Languedoc would best fit the bill and June concurred. To that end I chose the above wine a L'Amourier 2006 Minervois from Luc Lapeyre. If I do say so myself I think it was spot on. Fruity, minerally, acidic, this had a good balance of components and was accessible and quite French. Although I liked it and it was as I expected, I hope everyone else liked it, it may not have been to everyone else's taste but I tried not to choose anything too esoteric.
Anyhoo - the food was lovely, I had a Ross O'Caroll Kelly special; a rabbit, bacon and cabbage tart or "tourte" as it appeared on the menu and it was focking delicious, followed by a tender piece of veal (I know) and a divine shin of veal. I didn't go the whole cruelty to animals hog by having the fois gras starter but I was tempted...
The night ended later with more bubbly and the horrible caterwauling that is us playing with Singstar - thanks again BigEars for the fine evening and Go Leinster!
Posted by Willie at 9:50 PM