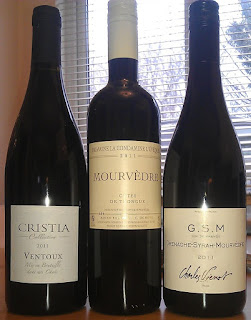 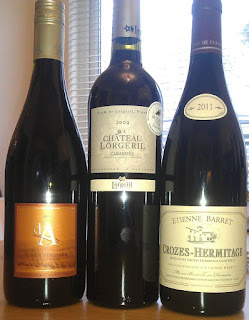 So I don't get invited to tastings any more, probably because I could never attend any, given that press tastings seem to be always on weekday mornings and I am now and have been (apart from a recent and distressing brush with the scratcher) gainfully employed. Although with hindsight, I should have gone on the hop at least once or twice, if I'd known how those relationships would end.

So I drove my lazy ass down to Blackrock on Sunday and pick up a half dozen reds, some I'd had before, in different vintages, some not. I could link to previous blog posts but eh, no. Let's judge them on their own merits.

Full disclosure: I haven't been enjoying my reds for the last couple of weeks. I suspect it's the god-awful cold I've been struggling with, which seems to have put the kibosh on my taste buds.
Note: This post will probably encompass three or more tranches, tranche the first consists of the following two wines:

Etienne Barret Crozes-Hermitage 2011 - €12 (reduced from €16-79)
Hmmmmm. While I said I wouldn't refer to previous reviews I do know that I used to like this wine very much, in previous vintages. This vintage didn't impress me, especially at it's notional non-sale price. It started off quite acidic but gradually smoothed out until it became a pleasant but unremarkable red. Not one I'd recommend at either price, I'm afraid.

Domaine Cristia Ventoux 2011 - €8 (reduced from €17-49)
Apparently the most expensive of my six purchases (pre-sale), this was a bit of a tannic beast at first but has been slowly softening ever since (I know the feeling). It's a bit peppery, maybe needs food to shine and on another night I'd probably be enjoying it more. For now it's perfectly fine and good value as priced.


Part Deux
Charles Vienot Grenache-Syrah-Mourvedre 2011 - €8 (reduced from €11-99)
This has the advantage of being open since last night, so no surprises that it's nicely opened up and is well balanced with some lovely fruity Grenache'y flavours. Good value as priced.

Domaine Astruc Syrah Viognier 2011 - €8 (reduced from €12-99)
Yummy! A blend of 95% Syrah and 5% Viognier. It's got the classic old-world Syrah flavours with a little twist. I do like the New World version of this (D'Arenberg's Laughing Magpie is a lovely, if regrettably expensive example).

Domaine La Condamine L'Eveque Mourvedre Cotes De Thongue 2011 - €8 (reduced from €11-99) This was a bargain last year at €7, and is still good value as priced. Warm and fruity but in an old-world way. I have bought this a number of times last year, which is the acid test, I guess