I finally made it down to Superquinn in Blackrock to see what's left of the sale. I had a shopping list in my head and I would not be deterred. However, the best laid plans etc. The wine that I had been most looking forward to was the Rare Vineyards Carignan Vielles Vignes which has been getting lots of love in the press and in the blogosphere. I was a victim of its success, however, as it is now sold out, although the nice man in the shop said he thought there was some left in the Ranelagh branch. 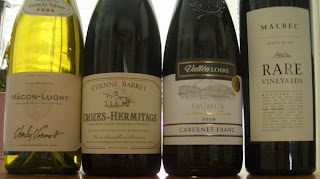 I swallowed my tears and bought some other stuff, left to right the wines are:

Charles Vienot Macon Lugny 2009 (€9 reduced from €12-49) Had a quick glass of this before dinner last night and was impressed. A nicely balanced Burgundy.

Saumur Cabernet Franc 2009 (€7 reduced from €10-49) I have a soft spot for Reds from the Loire. If done right they can be interesting and unusual; the blurb says "This fruity wine is attractive and easy to drink" This description is often the kiss of death, but we'll see.

Rare Vineyards Malbec 2009 (€6 reduced from €9-99) I couldn't get the Carignan so I got this instead. Part of an attempt to reclaim Malbec from Argentina, I guess, it was originally a French grape - one of only six allowed in Bordeaux wines, now sadly underused in that area. 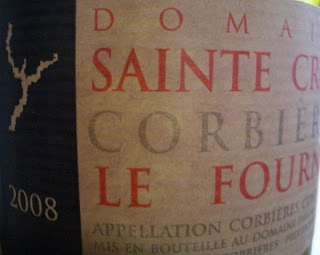 "This wine from the Hautes Corbieres in the South of France was sent in more in hope than expectation. After all, its a Grenache, young vine Syrah and Carignan blend. The grapes are hand harvested and there's only 25,000 bottles made each year. This is not typical supermarket fare and it would need a brutally honest, fair and experienced tasting panel to even appreciate it - dense purple, serious wine"

Firstly this is indeed a serious wine, not for the faint hearted. On the nose it was full, rich and spicy and then the fun started. Apart from the dark fruit and copious spice there was initially an undercurrent of something, maybe overripe fruit, I don't have the palate to place it. Herself did not like it, at all. After a while however, the flavours rounded out, harmonised and the tannins kicked in like a melonfarmer. As Kevin pointed out, this is not a bog-standard supermarket wine, but it's definitely worth a punt if you want to expand your horizons. We drank it without food but I think with those tannins, it's crying out for accompaniment, something hearty I would think.

We are off to Town Bar And Grill tonight to celebrate seven years of captivity. They used to have an interesting wine list, back in the day, including an interesting selection of Californian wines. I'm curious to see what the list is like after their near death and resurrection.

** Update - We had a L’âme de Familongue, Terrasses du Larzac 2006 from the Languedoc with our meal which was delightful and decent value to boot.
Posted by Willie at 10:39 AM